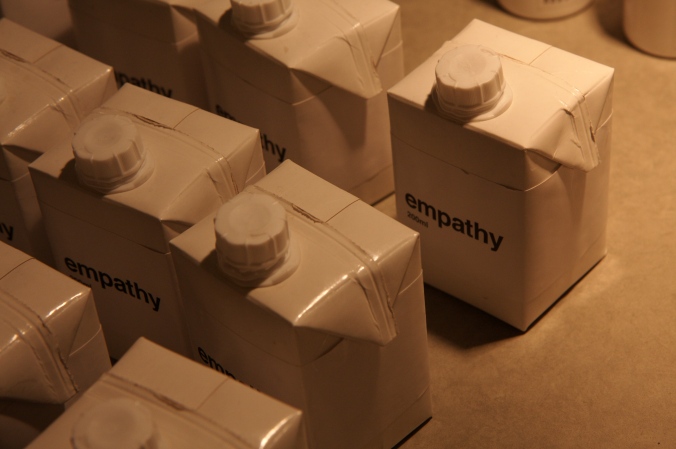 Watching a time-management TED talk recently, I had the opportunity to reflect on the overlap between the speaker’s perspective and some challenges I’ve noticed in the classroom this autumn, in particular our culture’s seemingly diminishing capacity to engage in empathetic understanding and how best to encourage that understanding in students.

The TED speaker was Laura Vanderkam, giving a talk called “How to Gain Control of Your Free Time.” Her thesis was that we must allow ourselves to prioritize the things in life that are important to us, and that if we do that, the time to pursue those things will appear. “We don’t,” she says, “build the lives we want by saving time. We build the lives we want, and then time saves itself.” This is of course the sort of pabulum that critics of TED talks find so infuriating; it sounds profound but doesn’t turn out upon scrutiny to actually mean anything. It happens that much of Vanderkam’s argument doesn’t hold up to scrutiny, either.

The early part of her talk centers on a woman who came home to a broken water heater and was happily able to “find” seven hours in her week to take care of the necessary clean-up and repair. We all claim to be busy, Vanderkam admonishes, “yet when she had to find seven hours because there is water all over her basement, she found seven hours. And what this shows us is that time is highly elastic. We cannot make more time, but time will stretch to accommodate what we choose to put into it.”

What Vanderkam ignores here is the likelihood that the woman with the broken water heater probably had to take time off work to wait for repair services, and if she was lucky enough to be paid despite her absence, she undoubtedly imposed on coworkers to take on additional duties in order to cover for her. Perhaps she imposed on a babysitter to work longer hours so that she could run errands related to the heater. Almost certainly, the woman “found” seven hours in her week by stealing them from someplace else. Upon returning to work, she probably had to make up all or part of those seven hours in order to get caught up on her work.

“Time is a choice” was Ms. Vanderkam’s central point, and what struck me most was her utter lack of understanding; her seemingly guileless assumption that everyone’s time is his or her own to arrange as they wish. There was no consideration of the logistics of shift work, only lip service to child-rearing obligations, and no mention at all of the thousands of small tasks that eat away at our time throughout the week: grocery shopping, laundry, doctor’s appointments, cooking, and the endless, Sisyphean cleaning up and putting away of things. Instead, Ms. Vanderkam asserts that, given any amount of free time, most of us squander it by “deleting emails’ and “puttering around the house or watching TV” as though we’re all callow, easily-distracted teenagers chronically neglecting our responsibilities.

What played out on the screen was a spectacularly myopic twelve minutes of upper-middle-class privilege. It didn’t help that the speaker was a white woman dressed as though for yoga class. If she’d picked up a glass of chardonnay while speaking she would only slightly have increased her resemblance to an Upper West Side socialite wondering why the poor allow themselves to be so drearily downtrodden.

Vanderkam doubled down on her blindness to privilege with her next story, about a woman who was not available by phone on a Thursday morning “because it was a beautiful spring morning and she wanted to go for a hike.” How was she able to pull off this inspiring feat of wellness and life-balance? Was she a time-management Jedi? The woman explained her strategy thusly: “Listen Laura, everything I do, every minute I spend, is my choice.”

Except that it turns out that the woman owned her own business, which afforded her the flexibility to go hiking on a weekday. So this is an inspiring example for about 13.3 percent of the American population, according to the Bureau of Labor Statistics, but only if we assume that all of those workers have employees that can run the business in the owner’s absence.

Why does this all matter, and what does it have to do with teaching and learning? Laura Vanderkam is a Princeton graduate. She presumably excelled academically in high school and then attended one of our most prestigious universities. She is an exemplar, in other words, of all of the things that a school such as mine expects to see in its most “successful” students. And yet, she remains stunningly unable to imagine that other people’s experience of time, work, and responsibility might be more constrained than her own.

Teaching at a private, college-preparatory school I assume that many of my students will become leaders in their career fields and thus have a significant degree of power and influence over others. That makes it very important both within my history classroom and in our larger institutional mission to be intentional in cultivating and encouraging empathy in our students. The ability to understand that not everyone experiences the world the way you do and a willingness to honestly try inhabit other perspectives is crucial to good citizenship and to a just and compassionate society.

This isn’t the time for people like Laura Vanderkam and her upper-middle-class myopia. We have important work to do as a society and that work demands empathy.  And when her narrow, privileged perspective is presented as a flashy, pseudo-profound TED Talk, it’s even more damaging because it creates what Howard Zinn termed a “learned sense of moral proportion.” Don’t worry about shift workers; they don’t merit our consideration. Or in Vanderkam’s own words: “I mean, some people’s lives are just harder than others. … I get that. ” But she doesn’t, because she goes on to assert that our time is flexible, available, and within our control in a way that it simply is not for many people. So if you don’t fit her narrative of choice and “prioritization” you’re either lying about your work hours or you just don’t register on Vanderkam’s radar as worthy of consideration.

5 thoughts on “Empathy and Time Management”